It was probably 2003 or 2004 when was majoring in cinema at the University of Iowa and taking a course called Nonfiction Video Production taught by David Ellsworth, when he decided to show us something called The Dancing Outlaw.  My first reaction, probably like many others, was 'is this real?'  I watched and shared it with many others since then.

If you haven't already seen or heard of The Dancing Outlaw, film reviewers like Jake Harvey have already done a great job of summarizing this pretty amazing piece of documentary filmmaking.  Instead I'll just share a few specific things I love about this film.

The environment.  In the heart of the Appalachian mountains, the state of West Virginia is some of the most rugged and beautiful (especially in fall) terrain in America, but for many largely historical reasons it is also a financially depressed region with some very visibly poverty-stricken small communities throughout.  This juxtaposition of natural beauty and economic hardship gives it a remote and isolated feeling despite it being even closer to many population centers than my home state of Iowa. 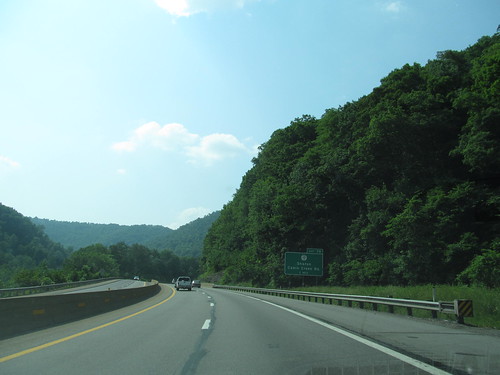 The people.  I've spent time in Kentucky as well and always marvel at the sound of the language there, and in West Virginia the accent is just as thick, and it's more than a twang, it's a musical quality.

Beyond the aurally pleasing quality of their speech, the real people that populate The Dancing Outlaw- including the primary character Jesco, his wife Norma Jean, his sister Mamie, even his deceased father D. Ray who still casts a long shadow over the family-  are all entertaining storytellers in their own right.  Many of the people I've met who survived a great deal of adversity or turmoil often have very dramatic, humorous or colorful personalities and the White family embodies this.

The music.  Beyond a few obligatory classic rock tracks that anchor the story in the rural South, the music of The Dancing Outlaw- a mix of guitar and banjo-driven bluegrass and country western- gives this the feeling of a time capsule anywhere from the 1970s back to the 1930s.  Any other time but now.


The quotes.  The interviews and stories throughout are so colorful that if you encountered them in a work of fiction you would dismiss the characters as over-written and outlandish.

If you see The Dancing Outlaw and find it interesting, there is a good chance you would appreciate the excellent (in my opinion) follow-up, The Wild and Wonderful Whites of West Virginia.

One could make an argument that films like these, and celebrating them, are exploiting these people and their problems and their culture.  Certainly, these portraits are not flattering in many ways and echo negative stereotypes about the region.  But I also think they add real human stories, detail and empathy to those general impressions, and to me that kind of understanding is always worth developing.

I also have no doubt that many more people know about West Virginia as a result of this film.  The way the state is branding itself as "wild and wonderful", to attract business and tourism, seems to confirm this.

I would encourage anyone to check out this unusual film- or the state made it possible- for themselves.

King of the substitute brands

I've re-published this story on Medium and will be moving all my posts over there soon.  Thanks for visiting!

Ben Hill
This blog is where I try to share on a regular basis about what I'm interested in, what I observe, and what I do.